Going Independent With My Crime of Fashion Series Relaunch

This summer is in many ways a season of new beginnings for me as I continue to go independent and relaunch my Crime of Fashion Mysteries under my own imprint, Lethal Black Dress Press. 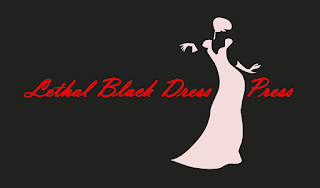 This heady challenge is possible because I recently reacquired my rights for the first nine COF books. I had already independently published the 10th  book. The series (and my relaunch) begins with Killer Hair,  which was originally published in 2003 by Penguin Putnam, now Penguin Random House.The latest, greatest version of Killer Hair is available as an ebook and in trade paper. Designer Knockoff, the second in the series, is available in Kindle and very soon in trade paperback.
While it was exciting to be ushered into print by one of the Big Five traditional publishers, it eventually became clear that I was heading in a different direction.

Everybody Wants to Know—Why Go Indie?

Publishing has changed dramatically since my first book came out in 2003. Back then, writers who independently published were scorned, ignored, and certainly not considered "good enough" for the all-hallowed New York publishing world. To be honest, in the early days of the self-publishing movement, I wasn’t convinced that self-publishing was the answer. Even though there were drawbacks to NY pub, I rationalized that the one thing trad pub did well was distribution. My early books were in all the bookstores, big chains and independents, all over the country, and always in multiple copies. Mystery bookstores were particularly great for me and other mystery writers. That was cool, I have to admit. I could walk into any bookstore across the USA and find my books on the shelf.
The late lamented Borders Books, in particular, was very good to me. They kept my back list in stock and in multiple copies. And then Borders fell, like the first domino. After the tragic demise of Borders, Barnes & Noble suddenly didn’t seem to be ordering nearly as many copies (of anything but the latest best sellers) as they had in the past, and they weren't stocking my back list anymore, except occasionally the first book in the series. By the time my last traditionally published book came out in 2013, I found only two or three copies of the brand-new book in each B & N bookstore. The competition in the big bookstore chain world was disappearing, and the distribution advantage of the traditional publishers seemed to be disappearing with it.
Other things changed as well. My first editor at the publisher was fabulous. She acquired the series, she championed my books, and she was thoughtful, helpful, and attentive to detail. However, she left the NY publishing world after our first year of working together. After that, I was issued four more editors of varying quality and enthusiasm. Although two of my books, Killer Hair and Hostile Makeover, were filmed for the Lifetime Movie Network, the publisher was pretty ho-hum about it. However, they did consent to put movie tie-in stickers on the covers..

I left traditional publishing for a number of reasons. While I won’t go into detail, I will say in the end, I felt disrespected.
As a former Washington, D.C. reporter, I've had my share of encounters with people who hated journalists. I was occasionally kicked out and barred from meetings, and I regularly had to dance a jig for certain press secretaries and gatekeepers in order to reach the newsmakers and report the news.
I look back fondly on those encounters.
Let me emphasize I was not alone in how I was treated by traditional publishing; I was not a special case. Not by a long shot. Nor was I particularly sensitive to the slings and arrows of outrageous copy editors. Other writers I know and admire have been treated with disrespect and disdain: Contrary to what the contract says, I know writers who have been ordered to rewrite books in a week, or even a weekend, and told that the authors' own corrections on galleys (caused by publishers' mistakes) would not be made. In addition, their scheduling requests are often ignored, their needs disregarded.

Am I exaggerating? You be the judge.

And yes, there are writers who will go down claiming everything is lollipops and cotton candy, and life with traditional publishing couldn't be better, 8 percent royalties are swell, and they just adore their covers.
At the moment, I am hearing many sad stories of authors who are unable to recover their rights after their publishers let their books go out of print. I feel especially fortunate to have accomplished this feat.

Late last year, when I discovered reported sales of my books had fallen below the threshold specified in my contract, I requested that the publisher return my rights in accordance with the contract, and I duly cc’d that request to my attorney. (The process is not quite as simple as it sounds.) Although I received no immediate reply. I had an inkling the rights reversion would finally happen when I started hearing complaints from readers that they could no longer purchase e-books of the first nine mysteries. It seems the publisher had taken the electronic books off booksellers' websites even before they officially informed me that my rights would revert to me. I took it as a promising sign.

At present, limited quantities of the original mass market paperbacks can still be found, for example at your favorite independent mystery bookstore, on Amazon, and Barnes & Noble, but the traditional publisher will not be printing any new editions. That is now MY job!

In the coming months I will continue to publish my updated and corrected mysteries as e-books and in trade paperback format, where they will have a much more readable book design and beautifully stylish and evocative covers by Bob Williams. The original mass market covers were cartoon-like and I admit some people actually really liked them. But no longer will you need a magnifying glass to read one of my books! The revised editions more closely reflect my original intent and the feel of the stories. To view the first two of the new covers, scroll down. 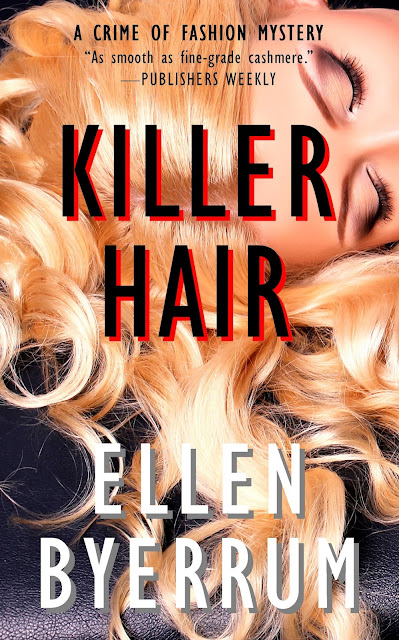 Killer Hair is the first volume in the Crime of Fashion series featuring Lacey Smithsonian, the intrepid fashion reporter who solves crimes with “fashion clues” in Washington, D.C., “The City Fashion Forgot.”  It sets the scene for Lacey’s further adventures in crime and couture (and romance). 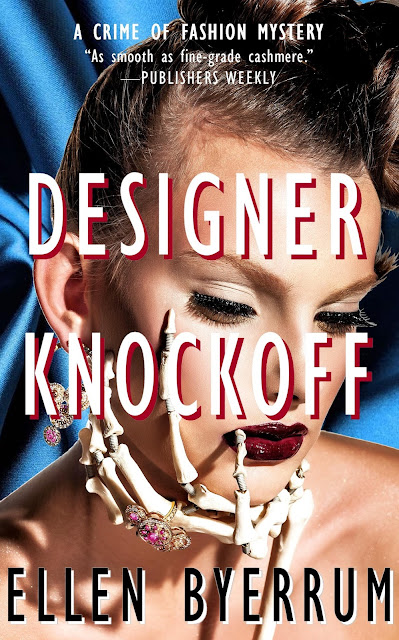 Designer Knockoff, the second book in the series, explores the disappearance of a young designer in the 1940s and a D.C. intern in the present.
As with anything, this project is taking more time than I anticipated, but we don't want to rush the process—we want to make the books the best they can be.

There is a lot of work ahead, but rest assured I am still writing and working on the next book in the Crime of Fashion series: The Masque of the Red Dress.